It is often necessary to seek joy in the simple things. There is always excitement in nature, in being surprised by a sunset, a chance meeting, or an inspiring idea. As a painter I find connection with a positive feeling within.

“Geometry is a visual form of harmony: the harmony of parts with each other and with the whole. The world is composed of diverse and contrasting elements. It is harmony that restores unity to the contrasting parts and weaves them into a cosmos..”
– Jonathan Quintin

I’m not a Buddhist or teacher, just a nature loving creative artist, but the philosophy of interconnection and impermanence has always interested me as having real pragmatic value both in my life and in my art. It is meaningful and coherent. Some have construed it as personal oblivion or the realization of nothing, but It is not a nihilistic philosophy.

“This view of enlightenment as oblivion is completely wrong. It is foolish. It is breaking the basic law of the Buddhist worldview of inter-connectedness, which was ­Buddha’s great revelation. This inter-connection is freeing; it can free us from suffering. There is no non-interconnected thing. There is no nothing. That is the simple hub of his teaching. There is no such thing as nothing…”
~Robert Thurman, from his book ‘The Jewel Tree of Tibet’

As ridiculous as it can seem to argue about nothing,  “Nothing, the complete absence of anything, has been a matter of philosophical debate since at least the 5th century BC.“
more on that here https://en.wikipedia.org/wiki/Nothing

In Les Misérables, Victor Hugo contrasts universal negation with universal affirmation:
“All roads are blocked to a philosophy which reduces everything to the word ‘no.’ To ‘no’ there is only one answer and that is ‘yes.’ Nihilism has no substance. There is no such thing as nothingness, and zero does not exist. Everything is something. Nothing is nothing. Man lives more by affirmation than by bread.”

Yes, phenomena and things are empty of independent existence, or existence inherently apart from anything else, but that does not mean they don’t exist entirely or are meaningless. I am means “I exist” as my true natural self in the Self, and not “I am nothing.” The individual expression of the One is an important aspect of self-realization in my opinion.

I went to the mountain to find further clarity on the subject, as I am always seeking a better understanding, and wrote down the following poem.

not nothing but
everything relative
and changing
transparent
in original mind

the universal Self
finding home
in itself fulfilled
and unadulterated

The mountains are slowly awakening into what will be another wild summer. This time of year is especially peaceful. The views are always fresh. They teach me everyday is a new day to learn, find meaning, and celebrate life in some way. There will always be the mystery. These pictures are from RMNP in Colorado last month.

neither dark
nor light
both in sight
at the point

Crepuscule is a poetic word for twilight.  Perhaps most commonly
heard in the Theolonious Monk composition Crepuscule with Nellie

beyond good and evil
beyond love and hate
beyond all opposite

seeking nourishment
and substance
at the source

sloping
and
aslant
multiplication
of imagination

calm before
the storm

space between
the noise

coolness beneath
the fire

a songbird above
the crowd

no answers
only ideas
feelings
transition
mystery
imagination
and wonder 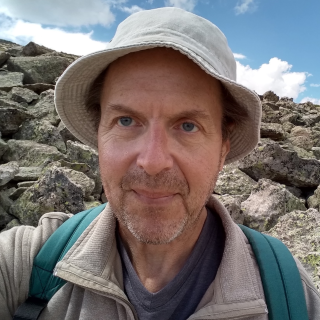 Originally from the Great Lakes region, I have lived in the Rocky Mountains for over 16 years currently home in Northern Colorado. I love the wilderness and timeless spirit of the ancient land along with the myriad subtle forms to be found in the unadulterated landscape. The lines and feelings in my artwork develop naturally here. Yet, the geometry of the urban spaces and assimilating varying perspectives are vital to my seeing as well. I'm always learning, re-inventing and seeking new input and experience on this ever unfolding creative journey.